Megan Vickell is a new brand of condominium owner that people predicting a market crash may have forgotten to factor in. 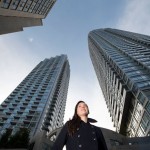 She’s young, single and ready to buy her first home. And, more importantly, she’s female — part of a growing demographic that just might be creating a new paradigm in the housing sector.

A report from Canada Mortgage and Housing Corp. shows women are a growing powerhouse in the Canadian condominium market. Among people who live alone, women made up 65% of owner occupants in 2011.

Condo owners: By the numbers

•65% Percentage of women among condo owner-occupants who live alone.

•42% Percentage of condo owners that are one-person households

•35.1% Percentage of Vancouver homeowners who live in a condo, the highest in the country.

•71% Among Canadians with a mortgage, the percentage of people with more than 25% equity.

The female factor is even more prevalent among older women with 76% of those 55 and older living alone women. Among lone-parents, women make up 84% of condominium owners.

It’s not just one thing about condos that is pushing Ms. Vickell to look at a high-rise. The public relations manager of eBay Canada says she’s close to putting in an offer this week on a 650 square foot unit.

“When I was looking I was grumbling because a lot of the maintenance fees were so high but then I was walking down the street after a big snowfall, and all these people were snowed in,  I thought ‘for a single female, I’m willing to pay those fees’,” she says. “I don’t even know where to start with half that stuff around the house.”

There are other perks of condominium living that attracts her to the market, including the 24-hour seven-day a week concierge service. “It’s everything you need in one place. There is someone to take my packages when I’m not there, I’ve got a gym. It’s really just all about convenient living,” says Ms. Vickell.

She sees the condominium as a stepping stone to a house. “I think of it as a five-year plan,” she says.