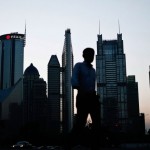 The country’s outbound property investment totaled US$2.1 billion in Q1 2014, according to Jones Lang LaSalle.

And now there are concerns about the quality of the loans that have fed into international property markets.

In an email titled “Will China’s Shadow Banking Kill the International Property Market?” Collier writes that the US$2.1 billion figure most likely understates true outbound Chinese property investment because it is hard to track shadow lending.

“Shadow lending is about 40% of total loans so the figure for property investment could easily be double US$2.1 billion — or more,” writes Collier. “More important, the funds are targeted in just a few places; just three cities, Chicago (who knew?), London and Sydney account for 50% of investment. No doubt, Los Angeles and New York will catch up soon.”

“Let’s say overseas property investment reaches US$10 billion in a year or so due to capital flight. How much of that will be backed by bad loans? What will the default rate be? This is an important question of you are a hedge fund buying up hundreds of properties in key areas. If the wind is sucked out of the market by defaulting Chinese buyers, it will impact property values significantly.

Official Non-performing Loan (NPL) ratios for Chinese banks are less than 1% (0.93% for Bank of China in 1H 2013). But much of the cash invested in foreign real estate will come from the shadow market. We don’t have good data for NPLs in shadow loans, partly because there are many different lender including Trusts, banks through wealth management products, pawnshops etc. But a ballpark figure of 10% would be realistic. If we assume 10% of US$10 billion, that’s US$1 billion in defaulting property loans. Half of those, or US$500 million alone, will be in a few cities such as Sydney, London and Chicago.”

We’ve already seen concerns about this in Australia. In late June, local media reported that Ed Husic, Labor MP in Australia, said that shadow banking in China is a cause for concern for Australia’s property market.

“With the rise of the shadow banking system in China, where people are going outside of the banking system to be able to finance investment, there are some concerns about the quality of the loans and whether or not they will actually be durable,” Husic told the ABC.

In late June, local media reported that Ed Husic, Labor MP in Australia, said that shadow banking in China is a cause for concern for Australia’s property market.

“…If those loans are being used to finance development in Australia, and if they fall over, what is the exposure of the Australian banking system to that?” “I think these are things we are very keen to pursue and we will be looking to talk to the Reserve Bank further about that in due course.”

Chinese regulators have been moving to curb shadow banking, but it’ll be interesting to see how this plays out in the international property market.