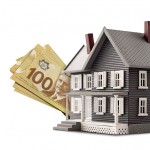 TORONTO – A new report suggests that Canadian homeowners are paying down their mortgages faster than they’re being given credit for.

The CIBC World Markets study says that homeowners are paying an additional $11 billion a year in principal that isn’t being officially recognized by the Bank of Canada.

It suggests that an estimated 30 to 40 per cent of households with mortgages are accelerating their payments. While 40 to 50 per cent of borrowers are estimated to have amortization periods of less than 20 years, rather than the standard 25 years.

Tal says that means the debt-service ratio in the Canadian mortgage market — what it costs to carry a mortgage as a share of disposable income — is 7.3 per cent, one point higher than the 6.3 per cent officially used in calculations by the Bank of Canada.

Tal adds that this makes the Canadian housing market much more stable than previously thought, if interest rates were to rise.

“Canadian households did not only resist the temptation of low rates, they used those low rates to pay down debt at a pace not seen before,” he said.

“Despite a lethargic labour market and an unemployment rate that is still too high for the Bank of Canada’s liking, debt service performance in Canada has almost never been better.”