The country’s largest condominium market has fully recovered and is breaking new ground, according to a Toronto research firm. 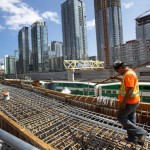 Urbanation Inc. says during the second quarter Toronto passed a new milestone with more than 100,000 condo dwellings in active development in the census metropolitan area. Of the 105,027 units in the pre-construction, under construction and occupancy phases, 18,744 remain unsold.

The firm notes in a release out Friday that’s “above historical averages but down 3% from a year earlier.”

The new condo market has performed well above expectations in the first half of the year Shaun Hildebrand, Urbanation’s senior vice-president, says there have been plenty of incentives in the marketplace for existing inventory and some new condo openings are proving more attractive to buyers.

“The new condo market has performed well above expectations in the first half of the year, reflecting a sharp rebound in buyer confidence,” said Mr. Hildebrand.

The 5,992 condo apartments sold in the second quarter were the third highest volume for that time of the year with only 2007 and 2011 having a better record for sales for the period. Sales were up 56% from the post-recession low reached in 2013.

Despite the boost in sales, prices have only moved up 2.8% from a year ago with Urbanation’ index showing an average sale price of $554 per square foot in the second quarter. Prices of unsold inventory climbed 1% to an average of $570 per square foot.

Fewer new listings than sales led to tighter market conditions with the sales-to-listings ratio rising to 47% — a level Urbanation says is below the 50% characterized as a balanced market.

Prices for existing condo apartments jumped 3.4% in second quarter form a year ago but that was still good enough to set a record high of $427 per square foot for an existing condo.