A third of Canadians would enter bidding war to buy a home: survey – Ask a Vancouver Mortgage broker

A third of Canadians would enter bidding war to buy a home:  – TORONTO — The Canadian Press 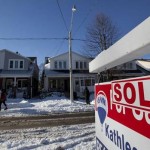 More Canadians are willing to enter a bidding war and fight it out to secure a property, according to a home buying report released today by Bank of Montreal.

It says 34 per cent of Canadians surveyed are willing to enter a bidding war when it’s time to buy a home, an increase of six points, or 21 per cent, from a year ago.

The survey, conducted by Pollara for BMO, suggests the appetite for competitive bids among major cities is the highest in Toronto, at 44 per cent, and Vancouver, at 41 per cent.

On a provincial basis, prospective buyers in the Prairies and British Columbia are the most willing to compete on the price of a home, with a reading of 38 per cent in both regions.

The BMO survey also reports current homeowners say they visited an average of 9.5 homes before buying. While 49 per cent said they were successful on their first bid, the figure drops to 42 per cent among those who bought in the past five years – including 32 per cent in Vancouver and 24 per cent in Toronto.

The survey results are based on random online interviews with 2,007 Canadians between Jan. 24 and Feb. 3. Of those, 1,051 were prospective homebuyers and the remainder were current homeowners.