If you want to have a mortgage in retirement, be prepared to make some big sacrifices – Ask a Vancouver Mortgage Broker 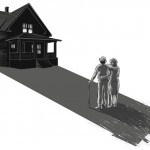 Maybe we shouldn’t be all that surprised that mortgages based on a 25-year payment schedule are now part of our retirement picture.

Pay that mortgage off? Why would you bother, especially if that money could be invested elsewhere at a higher rate? Mortgage broker Calum Ross says there is an opportunity to invest in today’s market using the money you would otherwise earmark for your mortgage. Keep reading.

It could be worse. Amortizations were as high as 40 years before former finance minister Jim Flaherty limited the length of loans with government-backed mortgage insurance. But even at 25 years, that means holding debt in retirement if you take on a new mortgage passed age 40 which is increasingly common in Canada.

Most planners seem to think it is a disaster waiting to happen because seniors don’t usually have the income in retirement to support debt repayment and that means major lifestyle changes.

Will Dunning, chief economist with the Canadian Associated of Accredited Mortgage Professionals, says among homeowners 65 years or older, 35% have a mortgage. Among those with a mortgage, the average loan-to-value ratio is 33%.

“I have a feeling a lot [of cases] of the mortgages in retirement are they’ve refinanced for some purpose, to finance a kid’s wedding or to lend money to a kid to pay for a down payment,” says Mr. Dunning.

I’m totally against it

Lise Andreana, a certified financial planner based in Niagara-on-the-Lake who counts many seniors among her clients, says going into retirement with debt is fraught with challenges.

“I’m totally against it,” says Ms. Andreana about taking a mortgage into your retirement. “You’ve got to make payments that will be coming out of retirement income.”

In situations where people do still have a mortgage going into retirement, it often proves a major problem, she says.

“One of my clients is drawing down registered funds over and above what would normally be required [to live off],” says the CFP. “My advice for the past five years has been ‘you need to downsize, you need to sell that house because you are going to run out of money.’ Getting them to do it? That’s their decision.”

If you want to have a mortgage in retirement, be prepared to make some other sacrifice.

“I have one client and she wanted to sent a bouquet of roses to a friend in the hospital. I said ‘you can’t afford, send a card’,” says Ms. Andreana, who thinks people should pay off their mortgage by age 50 so they can ramp up their savings for 10-15 years.

Toronto mortgage broker Paul Roberts says lenders are not keen on giving seniors mortgages because of the ramifications if they can’t pay. “You never want to go power-of-sale on an older person,” says Ms. Roberts.

She’s done mortgages for people in their 70s before and says the No. 1 reason she sees older people taking on debt is to help out their kids.

“It’s so expensive for homebuyers or people in their 30s or 40s to buy a house, compared to parents or grandparents, so a lot of times you’ll find the kids being helped out,” says Ms. Roberts. “Sometimes to help with the downpayment they are doing a financing on their own house.”

A survey from Bank of Montreal confirms the trend of giving money to children. BMO says 30% of first-timer home buyers expect parents or family to assist then in buying a home. In Vancouver’s pricey market, 40% expect help.

It’s not the first study to suggest the trend but there is no data on how these parents are funding the gift.

AP Photo/Tony Dejak, FileBMO says 30% of first-timer home buyers expect parents or family to assist then in buying a home.

“Sometimes, they are really just giving a pre-inhertance, they are going to give the money to the kids anyway so they give it to them early so they can enjoy it now,” said Ms. Roberts.

Jeffrey Schwartz, executive director of Consolidated Credit Counselling Services of Canada Inc., says not all senior mortgages are because of generosity.

“People are living longer, right of the gate they need more money to live. Many seniors are living on fixed income. But do their spending habits match their income?” says Mr. Schwartz. “The result is seniors are taking mortgages into retirement and, in many cases, it is becoming the new norm. In some cases they are even adding [debt].”

More worrisome is that if interest rates ever raise, many of these seniors will be squeezed further at a point in their lives when they can’t handle larger interest payments. “It could send them into a tailspin,” says Mr. Schwartz.

There is increasing evidence that seniors are getting themselves in more debt trouble.

Equifax Canada Inc. said last year that seniors led the pack among age groups when it came to ramping up their debt. Seniors make up about 8% of all bankruptcies, up from 6% five years ago, the ratings agency said at the time.

It’s not a huge cause for alarm because only 0.05% of all senior debt ends up in bankruptcy.

It’s a little bit scary, they are stretching their standard of living

Still making sure you have enough left over to has to be top priority for seniors, said Fred Vettese, chief actuary for Morneau Shepell and co-author of The Real Retirement, who has bucked the general thinking that you need 70% of your income for your retirement years.

“You don’t need that 70% because you are paying off a mortgage when you are actively employed,” said Mr. Vettese, adding that doesn’t hold true if you still have a mortgage in retirement.

But even if you do have enough money from your RRSP to pay off a mortgage, Mr. Vettese wonders why you would want to do it. Your RRSP is likely going to be invested in conservative instruments like bonds that pay a lower yield than the mortgage you are taking out.

About the only way a mortgage might make sense is if you are still working after 65. “If you are still making employment income, that’s how they would justify it,” said Mr. Vettese, adding there is more and more evidence people are working later in life.

Even so, he wonders whether people should really be taking on more debt at such a late stage in life.

“It’s a little bit scary, they are stretching their standard of living, just going for more than they can afford,” says Mr. Vettese.